H2-O2's MedRez.net Scheduling Tool is a user-friendly program that eases the pain of making block schedules and on-call and shift schedules for medical residencies. 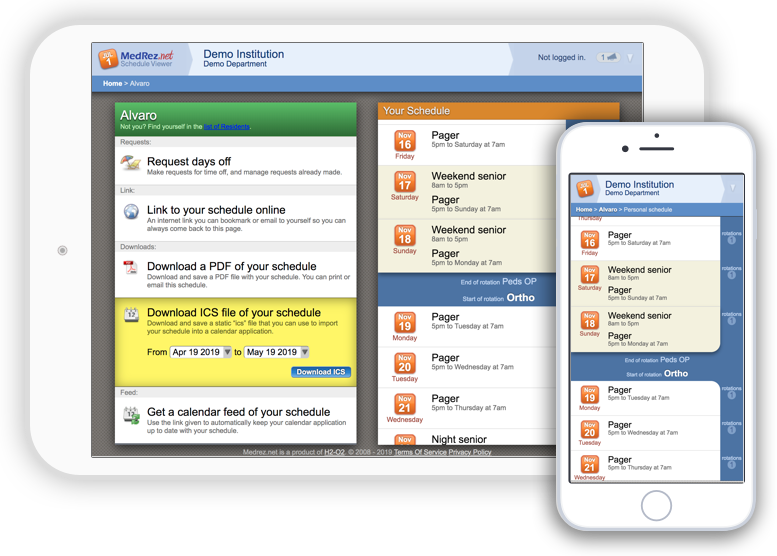 Trying to see your schedule?

Ask your schedule maker for the link or search for it on the MedRez.net home page.

The Story So Far

The MedRez.net Scheduling Tool by H2-O2 was designed to help chief residents and program coordinators make and distribute on-call and shift schedules efficiently.

The Scheduling Tool was originally written for a small neurology residency program in Los Angeles where the problem was to create a fair and duty-hour rules compliant schedule with just four residents covering call. The clinic days interfered with a Q-4 pattern, therefore an ad-hoc schedule had to be developed each month, to the chagrin of chief residents.

Making each schedule by hand took many hours of tedious work and often hid conflicts and other unfortunate surprises. With the very first highly experimental version of the Scheduling Tool the remaining four schedules for the year were all finished in two evenings.

Learn more about the MedRez.net Scheduling Tool. A free product trial is available.

H2-O2 is a medical software development company based in California. The founder, Olivier Forget is a former aerospace engineer who has always been fascinated by the use of computers to solve everyday problems.

The task of making schedules in a medical residency is difficult. Resident rest and minumum staffing requirements are contradictory factors that must be balanced. To make things worse the problem changes every month as residents move to different rotations. This kind of problem is perfect for a computer-based solution, and is just the kind of challenge that H2-O2 founder Olivier Forget relishes. Furthermore, the idea of helping the poor chief residents who are stuck with this tedious task is rewarding for the programmer.

What we believe in: